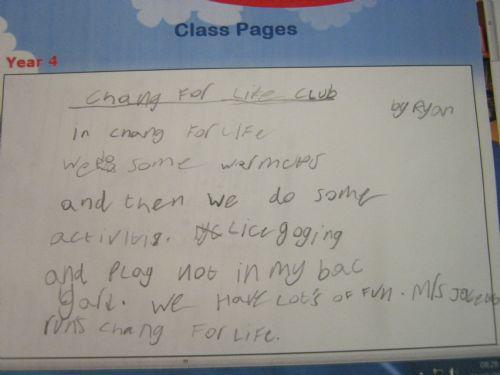 Blog Update
Date: 11th October 2014                        Author: Mrs Naylor
I have really enjoyed reading Friday's blog entries. It was particularly interesting to see which lessons you had written about and what you enjoyed about them. Unfortunately, I have had a few technical difficulties trying to upload them to the website. Please bear with me and come back soon for a further update. Have a lovely weekend.

Food chains
Author: Kiera
Date: 9.10.2014
On the 6 of october  year 4 has been leaning about food chains .We watch a clip from the lion king. The primary consumer is the animal that eats the producer.

ON TUESDAY WE STARTED A SCIENCE LESSON ABOUT FOOD CHAINS. WE DID THREE TASKS.  AS AN AGSAMPLE
CUCUMBER-> RABBIT->FOX->WOLF->BEAR
->LION->JAGUAR.
AT THE START OF THE LESSON WE WATHED A CLIP FROM LION KING TO TELL US ABOUT THE CYCLE OF LIFE. AFTER A WHILE WE STARTED DOING SOME FOOD CHAINS WE WROTE THEM UP IN OUR SCIENCE BOOKS. WE LABLED OUR FOOD CHAINS WITH A RULER. AT THE END OF THE LESSON WE GOT SOME PICTURES OF ANIMALS AND MADE THE CHAIN WITH THEM. OUR PICTURES WENT IN THIS ORDER.
WHEAT->GRASSHOPPER->FROG->AND THEN A GREY OWL. DO YOU AGREE WITH OUR CHAIN?

Food chains
Author: Freya       Date:9.10.2014
On Tuesday we started leaning about food chains and it was very fun. I will give you an example of one
Carrot-> rabbit->fox->wolf

We also watched a clip from the Lion King. We started making our own food chains with humans and to be honest I was struggling a bit. After that we leant which one is a producer, primary consumer, secondary consumer and a tertiary consumer. That was also the order that it goes In. Look at the example chain then put the names under in your mind. The arrow also means energy.in groups of four or three we did it with pictures I did,
Wheat->grasshopper-> frog->Grey owl
Do you now know what a food chain is and the labels?
The Lion king clip is  the circle of life .

Food chans
Author: Millie
Date: 9 10 2014
In year 4 we have been doing food chain  and we learnt what they are  . Theer  consoomers

On Tuesday y4 did a a fantascick  food  chains we woch a  clip of lian king.


Food chains!
Date: 09.10.14     Author: Stefan
In year 4 we learnt about food chains. Mrs Francis said to the class that we could make our own food chains.

Author Hannah  Date 9.10.2014
On Tuseday  I did a food chain a bout animals yousing   thes  wourds perducer  primary consumer  secondary consumer tertiary consumer .We did 3 thing we macke are on secon we suck it

On Tuesday y4 did a a fantascick  food  chains we woch a  clip of lian kink.

Y4’s Food Chains
Author: Poppy       Date:9th October
On Tuesday, in y4 we were learning about the food chains we learnt that grass is called a producer and a Rabbit is a primary consumer.


Year 4 food chains
author:Tobysb      date:09.10.2014
this week we have been making food chains out of different animals and different foods also these are some of the names producer prey predator primary consumer secondary consumer and tertiary consumer.

In year 4 we have been writing and drawing food chains and leaning some key words. Pry, Consumer.

On the 6th of October 2014, year 4 created food chains of different animals. On the one with me at the end, I chose: leaf→ worm → chicken →me. Here are some facts: at the start is the producer. Next is the primary consumer. After that is the secondary consumer. Finally is the tertiary consumer.

Quiz
What is at the start?
What are all producers?
Does a polar bear eat a penguin?
Do we eat worms?

Food Chains
Author: Toby            Date: 9th October
On Tuesday afternoon year 4 were learning about food chains. We were talking about the circle of life. The circle of life is a system about animals eating other animals. For example if you thought lions ate deer then your correct but still, a deer eats a lion as well, because when the lion dies it turns into the grass that the deer eats. Now that’s what I call a fact.

Last week I made a cool food chain it starting with a carrot that was  called a producer. This is how I remember when you go to a consert there is a producer because he is the first man or lady to speek. Then it gose to a rabbit which is a primary consumer.

Unfortunately not the ones with chocolate chips.

Some cookies are necessary in order to make this website function correctly. These are set by default and whilst you can block or delete them by changing your browser settings, some functionality such as being able to log in to the website will not work if you do this. The necessary cookies set on this website are as follows:

Cookies that are not necessary to make the website work, but which enable additional functionality, can also be set. By default these cookies are disabled, but you can choose to enable them below: